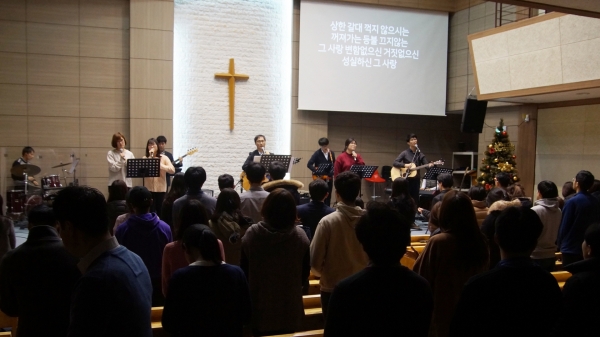 On the 19th, the first meeting of the praise prayer meeting for the Korean church's repentance and revival was held. The members of the metropolitan area gathered at the Jubilee Music Center, and the local members also joined through live broadcasting. Whole members were filled with the anointing of the Holy Spirit while they praised and prayed together with God at the same time, same heart.

Following the first praise, 'Near to the Lord', there was a praise of the 'Rock of Ages', 'Hope of the Nations', and 'One Way' singing the salvation through Jesus Christ. The members, praising God with the strength of life, meditated on the unfailing

Following the rocking sounds, members began to meditate on Jesus who called us to walk on the water, and hold us though our faith is weak.

Then, Pastor Hosea Yang shared grace with the text of God's response to Solomon's offerings [2 Chronicles 7:14]. He testified of the graces from the WGA, but still he confessed we're weak and bad habits innate. Though, in sometimes, our life seems heavy by unspeakable emptiness, he said "Our emptiness and sacrifice is our pride in Jesus Chrst."

"We have always been full of spirituality, trying to gather together and always had a fire of praise. However, the difficult situations, the environment, the anxieties and the secular values ​​and cultures, that have permeated in us, have interfered with God and me, disturbing our gaze. This time, beyond all this, we want to be a time to hear the voice of the Lord who walked and come to us. Let us take away all that hurts our hearts, trust in a faithfulness to God who builds and operates this world, and hold only the emotions and desires that have heated our hearts for the first time, and ask for the hope of heaven."

Fiery prayer soon began, praising "Heal Our Land" from [2 Chronicle 7:14], and "Love never Fails - turn back to our Lord", crying for true change and genuine revival.

Also, they prayed earnestly for the revival of the Korean Church and for the Christmas retreat to be the starting point of the revival. Finally, they prayed to the Lord who knew all of our hearts, and circumstances. In the field where praise and prayer are hot, great grace has come and I can feel the presence of warm God.

The praise prayer meeting was concluded with a prayer with a commitment to only the Lord and to live by faith. One participant said, "I received a lot of grace from the first prayer meeting. I had a difficult heart, but I thought that I should come to God with a holy heart while repenting. I really believe in God, trust in God, and live in dependence on God."

Another participant said, "It was time for the frozen mind to melt down for a while, as the mouth was opened and the mind was opened. It seems that the grace was warmer because it was gathered together with members of the people. "" God's love never fails. I trust in that faithful love, and I want to respond with love. I now have a prayer that I want to be a rock of the Lord. "

After the meeting, Mr. Joel of Elim Center had a prayer time for one person and one person for those who wanted to pray deeper, and he prophesied God's voice toward souls through gifts.

On the other hand, an organizer of the meeting said, "This gathering is used for repentance and revival in Korea and I want to be fully accepted by God. I will prepare for the meeting with prayer that the great blessings will be permitted by the fear, trembling heart and holy sense of mission. "